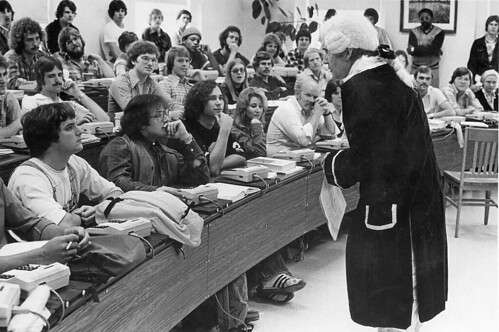 The Missouri State University faculty, staff and students, past and present, mourn the loss of Dr. Duane G. Meyer, who passed away Nov. 22 at age 89.

“President Meyer led our university with grace and humility,” said Smart. “He oversaw our growth from a regional college to a true university. He is remembered fondly by colleagues and former students and his legacy lives on through the Duane G. Meyer Library.”

An innovator and a visionary Upon Meyer’s appointment as president, the university’s yearbook, the Ozarko, described him as “leading the institution from the last remnants of the Puritanism and rigidity of a teacher’s college to the tolerance and flexibility demanded of a true university.”

Meyer had served as acting president of the university twice before and also served as the first dean of faculty.

In “Daring to Excel: The First 100 Years of Southwest Missouri State University” published in 2005, Dr. Donald Landon wrote: “It seemed important to President Meyer to remember who he was. He kept an ear of corn on his desk from the family farm where he was raised in Iowa.”

In October 2012, the Greene County Historical Society presented Meyer with its Life Time Achievement Award and Sen. Roy Blunt recognized him from the U.S. Senate floor. In part, Blunt said “Dr. Meyer’s leadership and dedication to excellence have reshaped one of the region’s great universities and benefited countless students who have passed through its halls.”

A leader of change academically and structurally While other colleges were experiencing static or declining enrollments, SMSU experienced a 62 percent increase in enrollment between 1971 and 1983, becoming the second largest four-year public institution in the state.

Three classroom buildings and four new residence halls were added to the campus, which had expanded to 125 acres. The first public-private facility project came in 1976 with the building of Hammons Student Center.

Private support for needed capital improvements led to the establishment of the SMSU Foundation and ended the tradition of naming new buildings after legendary faculty and staff. The Duane G. Meyer Library was the last facility to be named in honor of a faculty member.

During that time, the State Fruit Experiment Station in Mountain Grove was transferred to the university and the Missouri legislature granted state budget eligibility to the West Plains campus, which stabilized its future.